Bounty hunters get a share of the bail bond money – usually 10 to 20% of the total agreed amount. 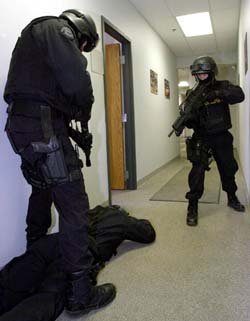 A recent survey indicated that most bounty hunters make anywhere from $50,000 to $80,000 each year depending on the state. The average bounty hunter handles 100 to 150 cases a year.

The term “bounty hunter” oftentimes conjures up images of the Wild West, where outlaws would be identified by wanted posters all around town and it was often up to someone who did not work in law enforcement to track down the fugitive. Modern bounty hunters though are trained and licensed individuals who work closely with the American justice system to make sure that criminals show up to court.

Whenever someone is arrested, bail will be set at a specific amount. Unless this amount of money is paid, the arrested person must remain in police custody until the court date. Higher bail amounts are placed in cases where a person is involved in a more serious crime. Additionally, a judge can determine that no bail amount will be offered on certain crimes, such as capital murder.

This is when the bounty hunter comes into play. Bail bondsmen often hire professional bounty hunters, also known as bail enforcement agents, to track down these defendants who haven’t shown up to court. If the person is eventually caught and arrested, then the bounty hunter is entitled to a share of the bail bond money that is usually 10 to 20 percent of the total agreed amount. If the defendant isn’t caught, the bounty hunter typically makes no money and will move on to the next case.

A recent survey indicated that most bounty hunters make anywhere from $50,000 to $80,000 each year depending on the state. The average bounty hunter handles 100 to 150 cases a year.

Different states and different countries require various levels of certification to become a professional bounty hunter. To be licensed, a bounty hunter usually has to learn all the basic rights and regulations of the local law system. They oftentimes also have to undergo a background check and pass a standardized test.

Although bounty hunters are rarely a part of the official legal system, they are generally very good at what they do. According to the National Association of Bail Enforcement Agents, almost 90 percent of bail jumpers in the United States are caught by bounty hunters.

When someone’s arrested and charged with a crime, there’s usually a lag – often months, sometimes longer – before his case goes to trial. Not everyone arrested has to sit in jail until it’s time for trial, though. Bail Basics In many cases, a process exists that allows the arrested person (the accused) to be released from…

Bail may be automatically denied for several penal code violations, including murder and a prior escape from jail or prison. However, bail may also be denied for a host of other reasons. When a person is arrested and taken to jail and booked, the person will have to stay in jail while he or she…

If a defendant can post bail, he is free to rejoin his life outside of jail while awaiting his court date. If the defendant fails to behave properly, the court can rescind the bail and order that the bond be forfeited. The defendant must then return to jail, despite the fact that he may petition…